A form of bullying

Body shaming is the act of criticizing someone based on their appearance[1]. It can also be self-inflicted, often as a consequence of society showcasing irrealistic body perfection goals in media[2].

It shouldn't be necessary to point out that body shaming other people is extremely problematic and damaging behavior[3], yet it is somehow far too common even in progressive circles[4]. Take a moment to reflect on your own behavior, and you might perhaps realize that you have been doing it without noticing it.

There are always better things to criticize about people you dislike than their appearance. Instead of caring about what they look like, focus on who they choose to be.

If you can't find the empathy required to stop mocking people you dislike for the wrong reasons, think about it this way: you might also be hurting people you care about. 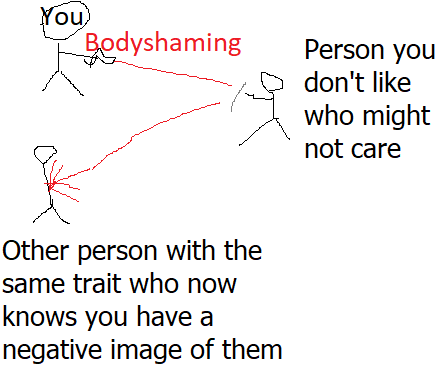 Body image issues are complicated and unique. You might not realize which body issues the people around you have, and might accidentally be targetting them as a collateral victim of body shaming, without realizing it.

Overweight people are some of the most common targets of body shaming. A common excuse for fat shaming is that people want to "help" them get in better shape by making them feel bad about their weight issues.

Not only is this extremely misguided, as they usually already do feel bad about their weight issues, there are also many[5] studies[6] showing that the long term consequences of fat shaming are the exact opposite of the intended effect, making weight loss harder and often even leading to extra weight gain[7].

Fat shaming is body shaming. Don't do it.

When is it okay to body shame?

In doubt, a good answer to when it is okay to body shame would be "never".

There might be funny situations where a "bad" person really looks like a movie villain or a problematic historical figure and you can't resist making the comparison. In this case, just make sure the reason your comparison is meant to be funny is because of the resemblance in both appearance and character, and isn't just mockery of a body trait.

In general, mocking someone for any trait which isn't part of their personality tends to lead to the same issues as body shaming. Nothing good comes out of targetting someone for their accent, their name, their age, their grammar, etc.

If you've been doing any of those things in the past, it's never too late to change: as long as you're willing to reflect on it, alter your behavior, and help others change theirs aswell. Shame the body shamers, don't let it happen without calling them out.

in the Cambridge Dictionary.

[3] Body shaming explored with a focus on body neutrality

[4] Study on the definition and perception of body shaming