Hello, do you want to see my dick?

In January of 2009, the french television show Complément d'Enquête

aired an investigation called "Ces ados qui nous échappent", in english "These teenagers over which we are losing control".

During this investigation, a reporter joins an Internet chat room under the nickname "Lolita13", making her seem like a young teenager. Soon enough, a user named "jonathan-du11" sends her the following private messages: 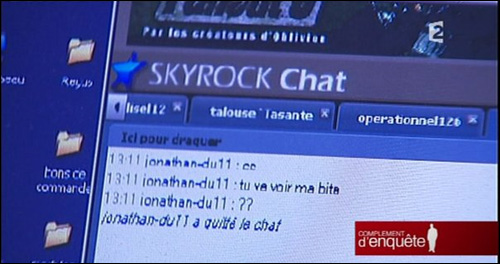 Screenshot of the chat messages.

Which can roughly be translated to english in the following way:

Unexpectedly, while a screenshot of this conversation is shown on screen, the narrator is replaced by a man who asks in a deep, neutral, and oddly joyful voice the following question: "Coucou, tu veux voir ma bite?", which is french for "Hello, do you want to see my dick?".

Contrasting wildly with the serious and anxious tone of the investigation, this question instantly turned into a meme on the french Internet. Below is a video of the scene, the memorable phrase is pronounced at the end:

Following this investigation, jonathan-du11 was quickly found on Skyblog

Exposed in his attempt to hit on an underaged person, he deleted his account out of shame[1].

is a direct elf.
The Simpsons

on Spion, archived by the Wayback Machine