PIPI in your pampers

Proffesionals knew how to lose

In late 2020, a professional chess

game was played over the Internet between two teams, the Armenia Eagles and the Saint Louis Arch Bishops, which the Eagles won.

Unhappy with this result, a member of the Arch Bishops, Wesley So

, publicly accused a member of the Eagles, Tigran L. Petrosian

of having cheated during his game in order to achieve victory for his team[1].

Angered by the accusation, Tigran responded publicly in the most childish and unprofessional manner imaginable, going on a long angry rant in broken english in which he called Wesley various colorful names, invited him to play a game of chess against him in real life, and implied that any further public accusations would be settled in court.

This dramatic interaction caused the event organizers to closely examine the situation. Following an in-depth investigation, suspicious behavior was found in the Eagles games, which led to a reversal of the match results, giving both the victory and the cash prize to the Saint Louis Arch Bishops. Tigran Petrosian, now a confirmed cheater, was also handed a lifetime ban from the biggest online chess platform at the time[2].

Below is a screenshot of Tigran's rant, followed by a text version which you can copy and paste at your leisure.

Some elements of this rant might seem strange or impossible to understand due to the amount of chess-specific vocabulary being used, but worry not, it does not really matter whether you understand the specifics or not. Just enjoy Tigran's wild ride. 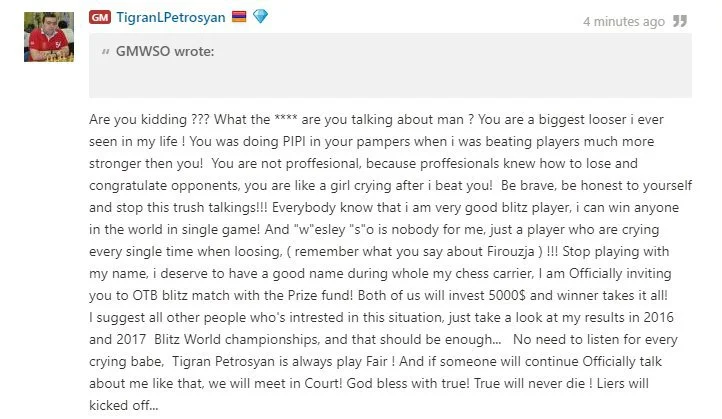 When this event happened, most of the chess community seemed satisfied with Tigran's lifelong exclusion.

The "PIPI in your pampers" copypasta quickly became a staple of the AnarchyChess community, to the point where Tigran was turned into a local antihero. Some even believe that he never cheated, and have made a few attempts at rehabilitating his image by trying to prove his innocence[3].

Did Tigran really cheat? Most likely. But it's impossible to prove.


Instead of speculating on drama, here is a 2021 video of Tigran winning a chess game so hard that it causes his opponent to fall off his chair. Proving the point that Tigran always play Fair, he extends his hand gracefully, blessing his opponent with true. True will never die!

[2] Armenia Eagles disqualified from the CPL